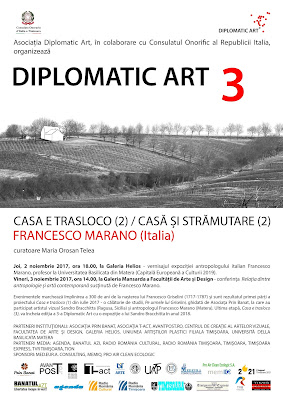 The Diplomatic Art exhibition series that started in 2014 continues with the 2017-2018 edition, including several events dedicated to Italy (which opened the first consulate in Timisoara, in 1922). The first phase of the project took place in July 2017 - a study-tour conducted by the Prin Banat Association with the anthropologist Francesco Marano (Università degli Studi della Basilicata, Matera) and the artist Sandro Bracchitta (Accademia di Belli Arti, Palermo) on a route described by Francesco Griselini in his book Attempt of Political and Natural History of Timisoara’s Banat. The two residencies offered by the Honorary Consulate of Italy in Timisoara, at the proposal of the Diplomatic Art Association, were occasioned by the 300th anniversary of Francesco Griselini’s birth.
With a strong interdisciplinary approach, the two artistic events (Francesco Marano's exhibition in November 2017 and Sandro Bracchitta’s exhibition in the spring of 2018) organized as a result of the two residencies are situated at the confluence of anthropology and contemporary art. The theme proposed is based on the concept of "home" (casa) in relation to "resettlement" (trasloco).
Starting from the premise that "home" represents a mix of experiences and feelings that relate to a certain place and to certain persons, the two exhibitions will approach particular aspects and connections between stability and uprooting. What makes you leave your home in order to re-organize your life elsewhere? When does a totally foreign place become “home”? How does this happen today and how did it happen in the past? The two particular cases that these artistic events will bring to question are related to the current population of an area in Southern Italy and the Italian colonists settled in Banat at the end of the 18th century.
Francesco Marano proposes a participatory artistic project documenting a custom specific to Southern Italy, namely to send parcels with home-made food to the children who left to study elsewhere. Food becomes, in this case, an attribute of the family environment, the feeling of safety and well-being granted by their parents’ home. In addition, the exhibition will include other documentary films based on Marano's anthropological research which evoke the deep connection of people to the places where they were born and where they live for a lifetime.
The exhibitions will be followed by meetings of the two Italian guests with students of the West University Timisoara.

1. Thursday, November 2nd at 18.00, at the Helios Gallery:  opening of the exhibition of the Italian anthropologist Francesco Marano, professor at the Basilicata University of Matera  (European Capital of Culture 2019).
2. Friday, November 3rd at 14.00, at the Mansarda Gallery of the Faculty of Arts and Design: conference “The Relationship between Anthropology and Contemporary Art”, held by Francesco Marano.

These events mark 300 years since the birth of Francesco Griselini (1717-1787) and are the result of the first phase of the “Casa e trasloco” (1) project that took place in July 2017 - a study tour, “In the Footsteps of Griselini”, guided by the Prin Banat Association, with the anthropologist Francesco Marano (Matera) and the artist Sandro Bracchitta (Ragusa, Sicily). The Diplomatic Art 3rd edition of will end with Casa este trasloco (3), an exhibition of Sandro Bracchitta in 2018.
Posted by Diplomatic Art at 10/31/2017 09:04:00 am No comments: